As Professor Karl Fagerström explains in Dependence on tobacco and nicotine, it isn’t as simple as a single substance addiction. It’s rather complex with lots of individual differences.

Here is something I noticed:

When I was a smoker (2 packs a day), one hour was the longest I could go without a cigarette. After that the craving would increasingly occupy my attention. Two hours? Impossible.

Last year I went to a tobacco control conference. Well, vaping in the audience wouldn’t have been welcome, I guess. So I faced these two hours with a bit of trepidation. Expecting to sneak out for a break. And I got a surprise! At the end the cravings were far less than after an hour as a smoker. It was more like the longing for the caffeine in a nice relaxing and invigorating cup of green tea. I even lingered and talked a bit before I went out and satisfied that longing.

At that point I had been vaping exclusively for almost 2 years. And I’m not quite a typical vaper. Most vapers reduce the initial nicotine concentration after a while. I’m still using 18 mg/ml and like it this way. I even vape more than in the beginning.

Of course I don’t have any reliable data, but a lot of long term vapers have anecdotes of similar experiences. They report that when adverse conditions deprive them of vaping, they can even go several hours without significant stress. I haven’t heard of anyone where possible withdrawal symptoms had worsened after switching. Further scientific investigation might provide interesting data on pure nicotine addiction.

A few vapers (not me) report that 8 to 12 weeks after the switch they suddenly experience a craving for smoking. Increasing the nicotine level can compensate this only partially. But it’s usually gone for good after about a week. To me this suggests:

I’m quite curious what these substances could be.

I know some vapers who still smoke, even if they rather would switch completely. And I don’t mean those that really still like smoking.

No. This is also a minority who really dislike the taste and feel of smoking compared to vaping but still can’t overcome their cravings. It can’t be the nicotine. It must be some other dependency. If you could identify the responsible substances (maybe the same as above, but with a stronger individual reaction?), it might be possible to create additives – just for them – to remove or reduce that craving.

And whoever want to dismiss this as “biased”, please consider Beneficial Bias

Mice experience it, too:

“Use of e‐cigarettes appears to be consistently associated with lower nicotine dependence than cigarette smoking.”

I’ll collect here links to blog posts of similar “anecdotes”. If you have one please leave a comment and I’ll add you. 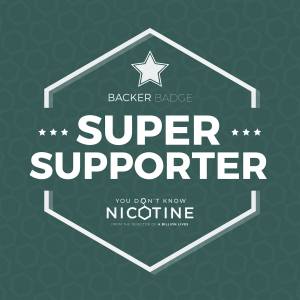