This article may contain traces of irony and sarcasm. If you are perceptionally or ideologically challenged this might be about you.

I usually aspire in this blog to be scientifically objective. This article is an exception. It is my personal, subjective perception. It was supposed to be a part of Titration Theories, but it turned into a rant.

A gaggle of so-called addiction experts (I refuse to call them scientists), who completely ignore the existence of self-titration also deny the existence of any pleasure in the acts of vaping or smoking. They simply claim that any perceived pleasure must be the addicts’ rationalisation and delusion. Based on this ideological dogma they insist—with some absurdly twisted “logic”—that limiting the maximal nicotine content might wean those brainless subhuman addicts.

One of them even publicly told the EU parliament that in her “expertly” opinion vaping would be dangerous because of the missing limit of a cigarette length. The user wouldn’t notice and keep on puffing and thus might even ingest a dangerous overdose of nicotine. That was the “leading tobacco control expert” in Germany. then head of the WHO collaborators infesting the center for cancer research.

(The German original is just as confusing. Pity the translator.) 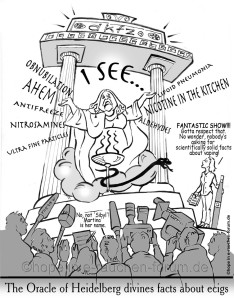 In my youth there were still a few brands we used to call “lung torpedoes”. Some of these contained up to 4 mg nicotine. Not many people smoked them regularly. And most of them didn’t smoke a lot.

Then the dogmatic meddlers managed to impose a limit. In the increasingly abused name of “Public Health”, of course. Preaching their sanctimonious expertly wisdom from their ivory towers to anyone who would listen. The vast majority of smokers wasn’t affected and didn’t even notice it. Just a minority was inconvenienced by the imposed need to retrain their habit to cope with the remaining too weak products. They had to smoke more to compensate. The result: The total nicotine consumption was maybe marginally reduced, but the total number of cigarettes smoked went up. Net gain for “Public Health”? Negative. But more profits from tobacco taxes and the tobacco industry profited, too.

Of course the tobacco industry was quite happy to jump aboard this healthist propaganda train and introduced the “light” brands. The “experts” had paved the road by promoting the imaginary virtue of reduced nicotine content. Of course that was obvious crap to begin with, but who can blame the tobacco industry for exploiting this free ride? All they care about is money. Well, somebody can:

I don’t like big companies. All they care about is money. Naturally. BigTobacco is portrait as the BigEvil, trying to kill its customers. I don’t think so. They’ll try to avoid anything that impinges on their profits. That’s all. No demonic ideology. Exactly like the Pharmafia. Strictly business.

Who I really despise are people abusing the term “science” and the public trust increasingly less associated with it.

It should be obvious by now that these “experts” are on the same scientific level as flat-earthers. But they still keep on publishing their ideological dogma in journals as if their claims had anything scientific to them. They give science a bad name.

Real scientists need to stand up an put them where they belong. In the kindergarten of pseudo science and conspiracy absurdities.

Addition: A good friend mentioned another group of experts I missed in my rant: THR experts who support vaping as vastly less harmful than smoking, but also advocate further limiting of nicotine levels in tobacco cigarettes.

I really appreciate that these experts correctly embrace the objective scientific evidence that doesn’t show any significant health problems caused by vaping.

Which by itself already should be rather disturbing. I used to assume that it would be totally normal for any real scientist to objectively evaluate scientific studies. That those who abuse the scientific idea to promote some ideological or financially motivated goal where just a few bad apples. Curtained by the scientific community. Instead they have been rotting the barrel. Now I know that I can’t even trust scientific publications when several seemingly independent source seem to come to similar conclusions. And this rot has infected the tree of science all the way. From the roots to the leafs.

More and more people notice this rot. Trust is dwindling. All thanks to those meddling “experts” who think it’s acceptable to exaggerate or even lie if it serves “The Greater Good”. Or do junk science designed to produce the desired results.

And guess WHO screwed up big time. Again and again. First they cried “WOLF!” several times for some animal flu. Which only resulted in states being forced to buy huge amounts of Pharmafia stuff that later even turned out to be rather useless anyway. At their luscious private party in Moscow the head honcho crowed about the importance of the humiliation of smokers and vapers while dismissing the raging Ebola epidemic in Africa as just another biological crisis.

The unavoidable result of this socially engineered distrust is obvious. If there happens appear any serious global health crisis, where it really would be necessary to trust experts, people won’t. Even I will first want to verify the alarming findings, before I commit to some—this time—sensible precautionary measure. Others will simply refuse to believe it. This could prove fatal. Big time. And all because some meddling zealots had to muddy the scientific waters.

But I digressed. Back on topic.

A lot of this subgroup of THR experts can only see the applicability of vaping as another, more efficient form of NRT. They can’t—or don’t want to—see the difference and what it means. So they often also promote the medicalisation of vaping. In the mistaken belief that this would be beneficial for the “efficacy” of vaping.

But no matter how supportive they are of vaping, I can’t and won’t accept their meddling attempts to push smokers “For their own Good”.

I despise this hubris of “social engineering” aka eugenics. Despite all the claims of caring for the health of the affected smokers, it’s not a “War on Smoking”, but effectively a “War on Smokers”. Always has been. It’s the same kind of propaganda that led to the atrocities against other more and more ostracised groups in the past. Teaching people to hate. Not the behavior as claimed, but effectively the people. Dehumanizing a whole part of society.

“Borrowed” from an interesting comment by Rose2 on Taking Liberties

They also suggested that the tobacco companies should do this “voluntarily” presumably because otherwise it would be done by force.

More interesting links from Rose in the comments below.